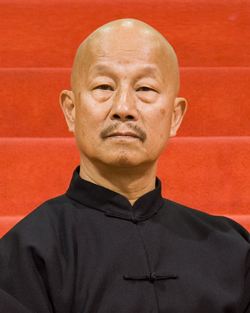 The Circular Praying Mantis Style of Kung Fu foundered by 9th Degree Grand Master, Henry Sue (Sifu).  Sifu was born in Canton in 1944 and emigrated to Brisbane, Australia in 1956 with his family. He commenced his Kung Fu training in the traditional style of Chow Gar Kung Fu under Dr Nat Yuen (Si Gung) and was awarded Custodianship of that style in 1995 by Ip Shui Si Tai Gung of Hong Kong.

Sifu was brought up in an era when the Chinese often fell victim to bullying from biker gangs and his kung fu training saw him overcome many, many vicious battles. His reputation as a fighter was well known and he is respected by all martial artists for his accomplishments and teaching ability. In 2004 Sifu was appointed Chairman of the Queensland AKWF before resigning in 2010 to focus on developing and spreading our new style of Kung Fu – Henry Sue Circular Tong Long (Yuen Mo Pai Tong Long).  He has trained for over 56 years and been teaching martial arts for over half a century in what is Queensland’s longest running Kung Fu Academy.  His style of teaching his very much ‘hands on’ and he personally teachers 5 nights a week at the academy.

A direct descendant of the Chen School of Tai Chi he has uniquely incorporated the Circular ‘yin and yang’ principles of Tai Chi into the kung fu to produce a pure fighting system which he has given his own name to i.e. Henry Sue Circular Tong Long.

More Links In This Section

Come in today and receive your first lesson free!

Find A School Near You